The Sale of Cockatoo Island Tenements

Pragma assists in the sale of mining tenements on Cockatoo and Irvine Island from Pluton Resources (in liquidation) (receivers & managers appointed).

”The settlement of the transaction today is vitally important to the people of Western Australia as Cockatoo’s intention is to commence mining operations as soon as possible. This will involve the employment of hundreds of Western Australians, both in the establishment and continued operation of the mine. The high-grade iron ore will also result in significant royalty returns to the State of Western Australia. 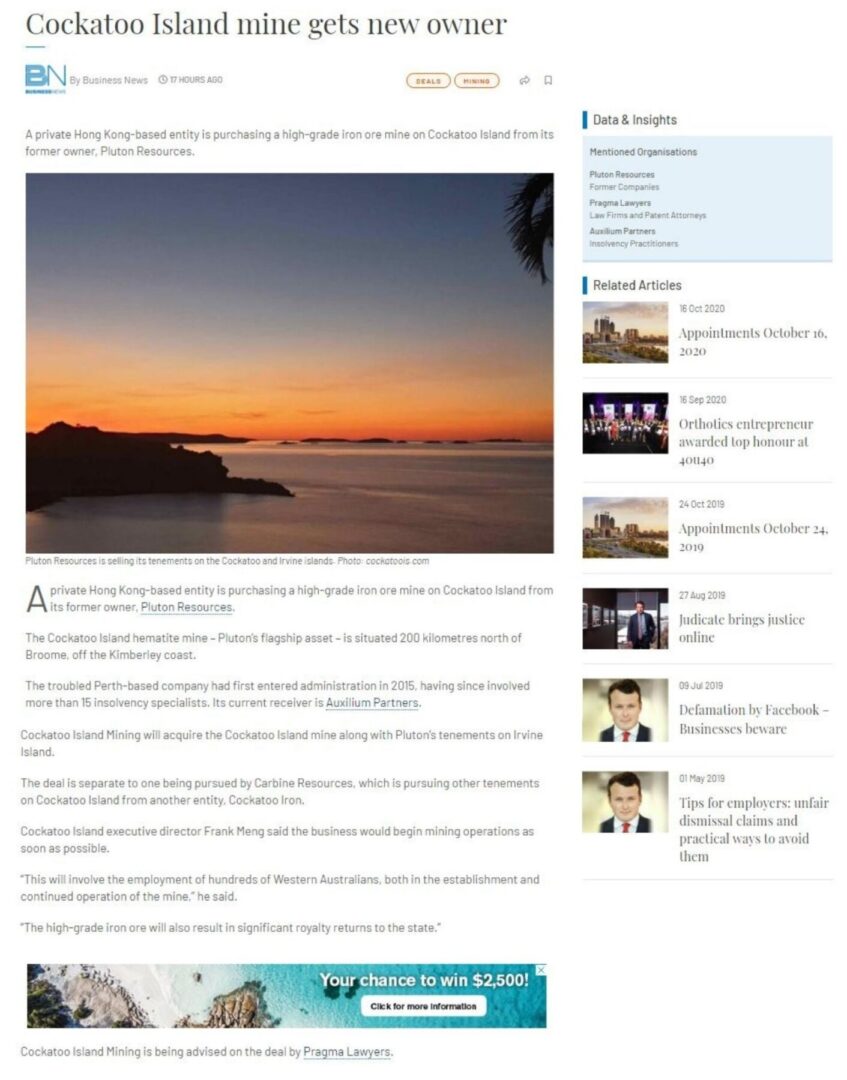 Cockatoo Island Mining Pty Ltd (Cockatoo) yesterday confirmed that it is the new owner of tenements previously held by Pluton Resources Limited (Pluton) with respect to Cockatoo and Irvine Islands.

The Board of Directors of Cockatoo includes experienced commercial and mining individuals who have an extensive understanding of mining operations and Chinese markets. The Board is led by Executive Director, Mr Fanpeng (Frank) Meng. This strong leadership will allow Cockatoo to establish a world-class and responsible mining operation, within an area that has demonstrated high-grade iron ore deposits.
Cockatoo and other entities have invested substantial amounts of money into Pluton to ensure that mining operations could one day commence again on the Islands, including payments to the State of Western Australia for Pluton’s unpaid iron-ore royalties. The environmental issues that were left by Pluton entering into external administration were significant and have now been subsumed by Cockatoo. This ensures the ongoing environmental viability of the Islands. As part of this deal, Cockatoo has provided the State of Western Australia with a suitable comfort that the environmental issues will not be repeated.